Remember to keep an eye on the “Upcoming Events” tab for new meeting and workshop announcements from around the state.

Dr. Tony Keinath with more on white mold. “Growers who grow sweet alyssum (Lobularia maritima, syn. Alyssum maritimum) as a nectar source for beneficial insects should be aware that sweet alyssum is susceptible to white mold. Diseased alyssum could increase the level of the pathogen in soil if the white mold fungus forms sclerotia on diseased plants. Growers who have alyssum in or along their fields in winter or early spring should check for symptoms of white mold. Symptoms include collapse of part or all of the plant and yellowing or blackening of tissue.”

Zack Snipes reports, “The cold weather (at least a few days of it) has showed up.  This cold weather might slow our strawberries down which wouldn’t be a bad thing.  I have seen ripe berries on some farms.  The question I keep getting is should we start fertilizing to push our berries and cover them.  Most farms I have been on do not have a plant that is large enough to support bearing fruit.  Most farms have 3-4 crowns right now per plant and I would personally like to see that 4-5 before we really start pushing them.  Keep in mind that if we begin to fertilize and cover this time of year we will be picking in about 35 days.  Here are a few questions you might want to ask yourself. Do you plan on opening the last week in February? Do you plan on covering each night the temperature dips into the low 30’s?  Are you ready to apply protective fungicide sprays starting now? Another question I have gotten recently is when to cover and when to not cover.  The chart taken from Strawberry Plasticulture: A Grower’s Guide shows the critical temperatures for each of the bloom and fruiting stages.” 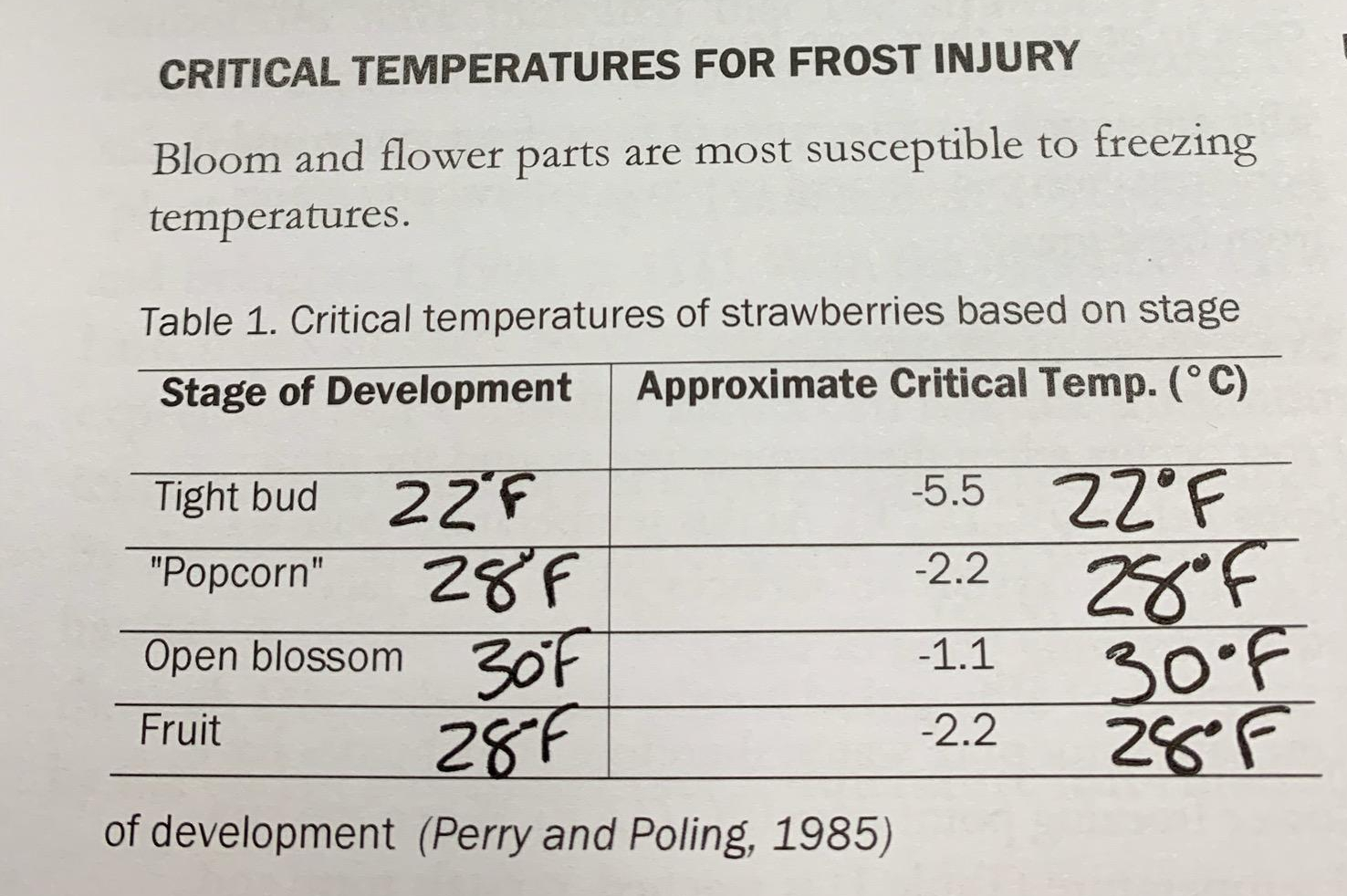 Justin Ballew reports, “Last week was fairly mild, but it turned cold over the weekend. Lows have been in the upper 20’s the last couple of mornings.  We’ve seen a lot of blooms developing on strawberries over the last two weeks and this cold is going to take them out.  I’ve been getting a lot of questions about covering, but it’s still too early to start protecting blooms.  Letting them die right now is the best thing to do and it won’t hurt yields.  More blooms will develop when the weather begins to warm up. Just be sure to sanitize the plants well in the early spring to remove all the dead blooms that can become inoculum for Botrytis.

Bruce McLean reports, “The weather has returned to a more seasonal pattern… for at least a little while. Collards and cabbage are still looking very good (for the most part). Sclerotinia is being found (localized) in fields – effecting cabbage more than other brassica crops. Strawberries are looking good. Other than some early flowering (due to the recent heat), no problems are being seen in the field. Muscadines are currently being pruned, as well as blueberries and blackberries. The recent warm weather has begun to push some early bud break and flowering on some blueberries, on both highbush and rabbiteyes. Hopefully, the return of colder temps will delay any further growth until a little later into the season… because it is still a bit early for them to wake up.

Tony Melton reports, “Greens including collards are damaged severely by cold. Demand for greens has dropped drastically but some small growers have covered to maintain supply. Most strawberry growers are not protecting from cold and allowing cold to kill flowers and fruit.”

Kerrie Roach reports,  “With almost 16.8 inches of rain recorded for January so far at the Oconee Airport, the Upstate is soggy to say the least. Cold temperatures have finally arrived, and pruning has commenced in full force for tree fruit growers. Apples are just about finished with most growers waiting a few more weeks to start any peach pruning. We are finally significantly adding to chilling hours.”