Small packages of seeds have started showing up in the mail around the country, including in SC, and no one is sure why. The packages appear to be from China and that’s about all we know at this time. The SCDA and Clemson’s Department of Plant Industry are investigating, as is the USDA. Since we do not yet know if the packets contain invasive species or plant diseases that may affect our agriculture industry, we need to take this seriously. 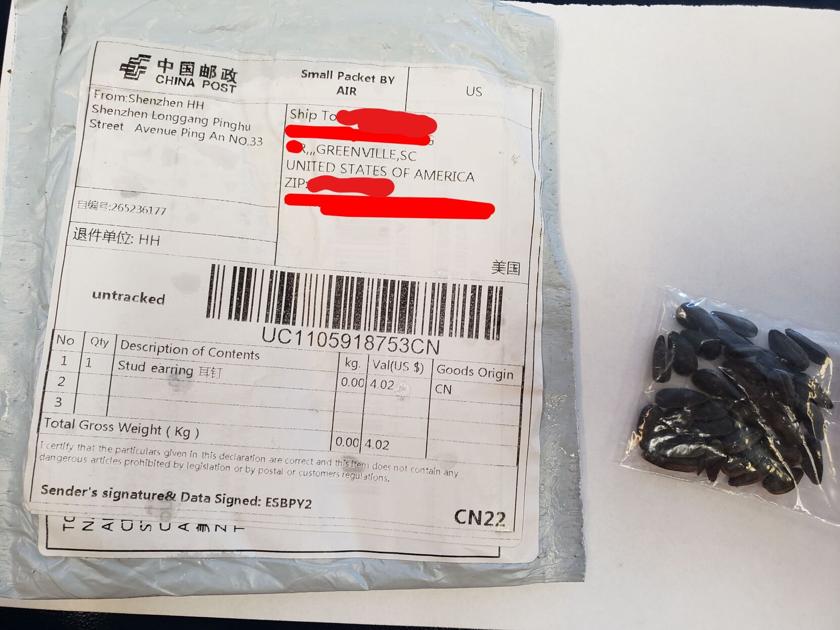 A mysterious package of seed that recently arrived in Greenville, SC from China. Note the false description of contents on the shipping label. Photo from The Post and Courier

If you receive a package of seeds that you did not order, follow these steps:

The Asian longhorned beetle has been found near Hollywood, SC (Charleston County).  This invasive tree pest primarily attacks maples (especially red maple) but also elms, willows, and birches. Clemson Regulatory Services, Clemson Extension, and USDA APHIS need your help in detecting this beetle in the Lowcountry. Adults are large (up to 1 ½” long) black beetles with white spots, black and white striped antennae, and bluish feet. Signs of ALB include large, pencil-sized holes on trees and bleeding from wounds on the trunk. There are several native beetles that look similar to ALB – please check out the fact sheets on the HGIC page. If you think you’ve seen ALB, please contact the Clemson Department of Plant Industry at invasives@clemson.edu or by calling 864-646-2140.

Following pupation, the adult ALB bores its way out of the tree leaving these large holes in the trunk.

The story of the introduction of the Asian Giant Hornet (AGH) into North America has been circulating for at least six months by various news sources, but the use of the term “murder hornet” in the NY Times article this past weekend created a viral sensation that is now being run by local news media statewide.

The term “murder hornet” was coined to describe the carnage created when they attack honey bee colonies. The appropriate name is the Asian giant hornet (AGH), Vespa mandarinia.  The AGH was first detected in September of 2019 on Vancouver Island near Nanaimo, Canada.  In December, a dead specimen was found in Blaine, Washington on the Canadian border, and credible attacks on honey bee hives were recorded. At present, AGHs have never been found in South Carolina or the eastern US, and experts say there is no cause for concern in SC.

The AGH is native to eastern Asia, ranging from India through China to Korea and Japan. Genetic analysis of recovered specimens suggests North American populations may have multiple origins (one from Japan and another from Korea), suggesting two separate introductions.

Adult hornets feed on sweet substances and have a high affinity for honey bee colonies, as they contain both sweet fluids for adult workers and larval insects which they feed to their young. AGHs are about five times larger than a honey bee and easily overcome their defenses. Honey bees might be able to fend off a single hornet by balling around it, but when multiple AGHs attack, they decapitate the defending honey bee workers, leaving behind bee carcasses at the hive entrance and bottom board. After destroying the workers, the hornets then collect the larvae. This destruction of the colony can occur in just a few hours.

AGHs are no more harmful to people than wasps like European hornets, bald-faced hornets, yellow jackets, or paper wasps.  They are no more defensive than other wasps and stings tend to produce similar reactions, including localized pain and swelling with some isolated tissue necrosis. Deaths associated with AGH have mostly been people suffering from anaphylaxis or other underlying health issues.