All of SC is now under a “Home or Work” order from Governor McMaster. Farming is an essential industry, so Commissioner Weathers has issued this Notice of Essential Food and Agricultural Employee form that farms may fill out for each employee certifying them as an essential employee. Employees should keep this form with them while commuting to and from work.

Zack Snipes reports, “We had a great week of weather last week in the Lowcountry.  I am extremely concerned and curious to see what things look like after the powerful line of storms we had Monday morning.  I feel like we will see lots of damage to taller crops and in areas where there were no windbreaks.  If plants suffered in the storm and have open wounds from sand, wind, or tying twine, then expect to see more disease.  It would be a great time to get out some fungicides and bactericides to prevent spreading of diseases.  As of Friday, our crops looked great.  I have been seeing LOTS of damage by our biggest pest in the Lowcounty…DEER.  Fencing is cheap compared to the amount of money you are losing to browsing damage. Check out this publication on fencing.

Justin Ballew reports, “The weather was nice last week and crops really responded. Brassicas and sweet corn are both growing really fast. Strawberry production really picked up last week too. Luckily, sales at produce stands have been really good lately. We had a really strong storm come through early Monday morning and we expect to see some water damaged strawberries as a result and probably some diseases like black rot on brassicas.  Strawberry growers, be sure to sanitize the plants well so damaged fruit won’t become inoculum for Botrytis and anthracnose.

Sarah Scott reports, “The peach crop is coming along nicely. Some high chill hour requiring varieties are developing at an uneven rate but only time will tell if there will be a good crop on those. Strawberry production is picking up. A couple of cooler nighttime temperatures may have slowed progression a bit but harvests are still on the rise. Field crops like spinach, kale, and broccoli are performing well. Some cucurbits being planted as well as tomatoes as labor needs are filled.

Blossom blight caused by the fungi, Monilinia fructicola. Extended bloom and lots of rain during winter months made ideal conditions for infection. Refer to the 2020 Peach Management Guide for information on treating and preventing spread of brown rot. Photo from Sarah Scott.

Tony Melton reports, “Awful infestation of early season diamondback caterpillar on brassicas like collards/cabbage most likely due to the overwintering on brassicas like radish in cover crops.  When these crops are terminated for summer cropping these insects and other insects like yellow-margined beetle invade vegetable production fields.  Also, cover crops containing brassicas should not be used in vegetable production fields because they increase diseases like bacterial soft rot and sclerotinia, which are tremendous problems in all types of vegetable crops.

I hope all strawberry growers got their ripe fruit out of their fields before this storm – if not a lot of fruit will most likely be discarded.  Some rain was needed hope not too much falls – in S.C. when it rains it pours.  Most summer crops are planted and we did get some wind damage and sandblasting causing stunting but no frost damage in the Pee Dee.  The first plantings of processing tomatoes, peppers, and cucumbers are in and after this rain more will be quickly following.  Spring brassicas are loving this rain.”

Kerrie Roach reports, “It was confirmed that a tornado touched down in Seneca, SC early this morning around 3:30am. Reports of damage to agricultural operations have been limited, but there is certainly significant damage to business and residential structures. Apple and peach crops are looking good right now. We have many farmers market operations who will be replanting/reseeding after last night’s heavy rains.”

Andy Rollins reports, “We have been trapping high numbers of Oriental Fruit Moths in pheromone traps in peach orchards in upstate SC weekly.  Numbers have been much higher in our late season varieties.  We are assisting growers with correct timing of spray applications directed at egg hatch.  We are also encouraging growers to rotate insecticide classes to prevent failure of the pyrethroids if this hasn’t already occurred.  Dr. Brett Blaauw UGA/Clemson peach entomologist has been directing the effort aimed at reducing damage from this pest.”

Zack Snipes reports, “Strawberries have been planted in the Lowcountry. Some rain throughout the week has really helped them take. Already seeing deer tracks in fields without fencing. I scouted a few fields and found enough juvenile spider mites to warrant a spray. We need to stay on top of the mites this season. Please scout your fields and take necessary measures to manage them.”

Strawberry transplants are getting established. Photo from Zack Snipes.

Justin Ballew reports, “We had a few showers come through the midlands last week. Strawberry planting has wrapped up and the young transplants are getting established well so far, as we’ve had pretty favorable weather lately. Fall brassicas are looking great and worm pressure is still a little below average. Fall crops of cucumbers, tomatoes, peppers, green onions, eggplant, squash and zucchini are still being harvested.”

Bruce McLean reports, “Brassica (cabbage, collards, turnips, broccoli, etc.) and strawberry planting has finished. The crops look very good. Okra and squash will finishing up soon. Downy mildew is still a challenge on squash. Brassica insect pressure has been relatively light, except for aphids which have been moderate in limited locations. Continue to scout regularly.”

Tony Melton reports seeing lots of worms and moths. “I have seen sweet potatoes stripped by stripped armyworms, armyworms, loopers and velvetbean caterpilars in greens, and millions of corn earworm moths in peas.  Also false chinch bugs are loving the turnips, kale, and mustard.  Strawberries are getting established. ”

Worms of all kinds are wreaking havoc in the Pee Dee.  Photo from Tony Melton.

Zack Snipes reports, “A few rain showers and some cooler temperatures have really helped out our fall crops.  Collards, kale, and broccoli have really perked up this week and some early stuff could possibly be cut this week. Our worm pressure has not been terrible this year but that does not mean you can take a week off of scouting.  Strawberries have gone in throughout the Lowcountry and are looking great after some cooler temperatures and rain. If you have not put up your deer fencing for strawberries, get it out ASAP.  Each plant can be worth around $3, so one night of feeding can really cut into your bottom line.” 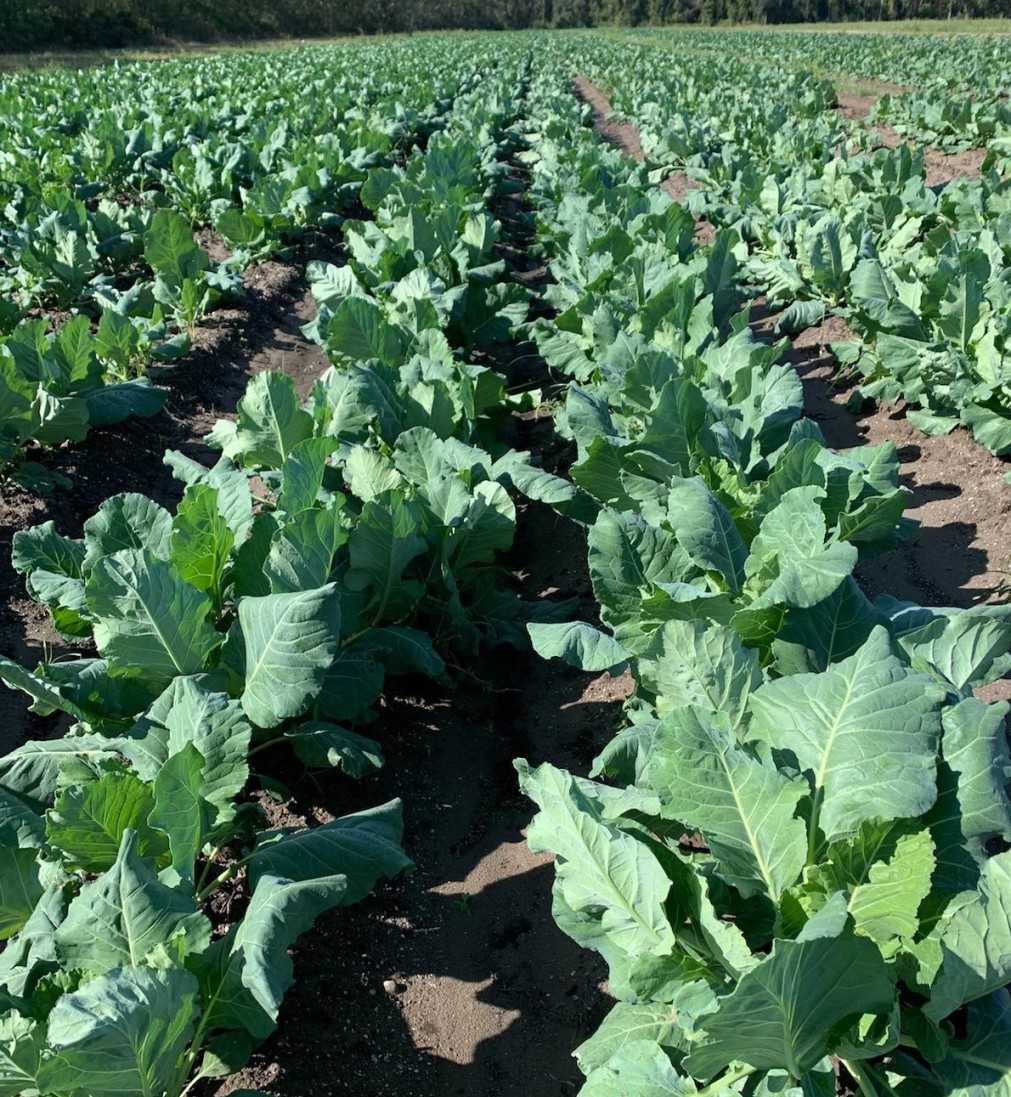 Brassicas have really perked up in the lowcountry. Photo from Zack Snipes.

Justin Ballew reports, “We got some much needed rain this past week thanks in part to Tropical Storm Nestor. This has our fall brassicas growing fast and looking great. We’re still seeing some whiteflies in brassicas, but the caterpillar numbers are a little lower for the time being.  Lots of strawberries were planted last week and they are developing well so far. The rain and cooler weather has really been helpful in getting them established. Strawberry planting will finish up this week for the folks planting larger acreages.”

Collards are looking great after the rain and cooler weather.  Photo from Justin Ballew. 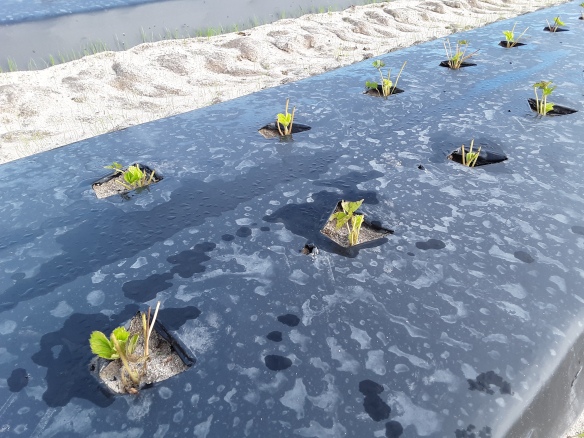 Sarah Scott reports, “Cooler temperatures and much needed rain are giving a boost to fall crops including collards, cabbage and broccoli. Bell peppers, tomatoes, squash, broccoli, sweet potatoes are still being harvested as well as hemp. Strawberry plants have been going in over the past couple of weeks.

Bruce McLean reports, “The recent rain from the remnants of Tropical Storm Nestor helped to improve dry soil conditions in the Pee Dee. This beneficial moisture should help the remaining cucurbit crops (yellow squash, zucchini, and cucumbers) and the okra crop through the final few weeks of the season. Planting of brassicas (collards, cabbage, kale, broccoli, etc.) and spinach are finished. Strawberry planting should be finished in the next week. Worm damage on brassicas has been light, but aphids have been plentiful in isolated locations. Be sure to scout your fall crops regularly.” 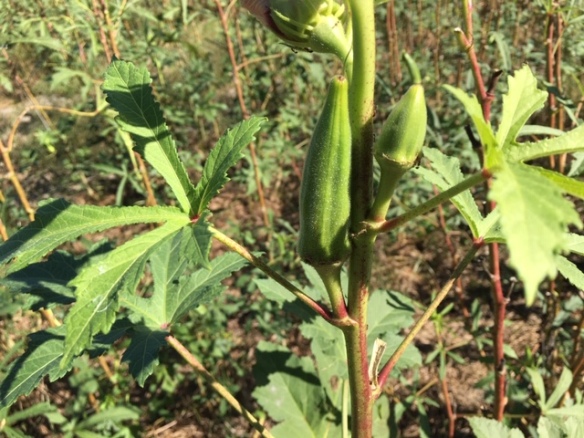 Okra crop is really starting to slow down, but quality is still good. Photo from Bruce McLean.

Tony Melton reports, “Still in the middle of harvesting processing sweet potatoes – not enough rain to size them up earlier, now having to wait for soil to dry and more rain is coming.  Bacterial disease on turnips bad this year (maybe because of the heat), losing about 1/3 of yield because we’re having to harvest early.  Also, reduced stand on greens from the beginning because of the excessive heat at planting.  Also, bacterial soft rot is bad in the heat where irrigation and harvest equipment has spread through the fields.  A lot of moths (Hawaiian webworm) flying in fields. We’re spraying once, which is more than usual (with Coragen and similar products) to keep larvae out of greens.  Last of the pickling cucumbers are being harvested this week.”

Mark Arena reports early harvest of pecans may begin soon. “Here are some tips for pecan management for the month of October. Prepare for harvest by mowing the orchard floor and keep it free of limbs and other debris. Maintain adequate soil moisture. Treat all “mouse ear” nickel deficiency noticed. Lime, zinc, phosphorus and magnesium can be applied if deficient. Scout and treat aphids, mites and pecan weevils as necessary. Apply preventative fungicides as scheduled and be aware of pre-harvest intervals for all chemicals applied.”

Zack Snipes reports, “Strawberries are going in or will be going in very shortly here in the Lowcountry.  I want to remind everyone how important it is that deer fencing is put up.  Ideally the fencing should be put up BEFORE the strawberries go in the ground.  I see hundreds of plants each year destroyed by deer.  Assuming the value of that plant is around $3 (1.5 lbs berries per plant and $2 lb), it doesn’t take losing a lot of plants to really feel the financial loss. Please read an article I wrote about setting up and maintaining an inexpensive deer fence here.

Deer feeding damage can cause significant yield loses to strawberries.

Justin Ballew reports, “The weather felt more like fall this past week, but still no significant rain.  The very first strawberries have been planted in the midlands with a lot more planting expected this week.  The first plants were set just before the weather cooled down and the heat really took a toll on them.  95 degrees just isn’t good for strawberry transplants.  The current weather should be much more favorable for planting.  Be sure to set plants at the proper depth and overhead water transplants adequately.  Take a look at this Strawberry Growers Checklist for some good tips for fall strawberry management.” 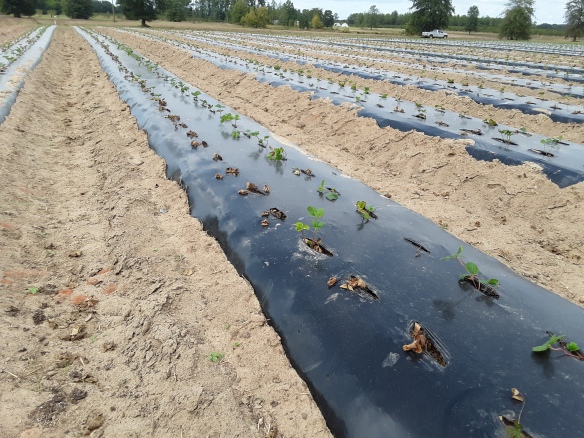 The 95 degree heat really took a toll on these strawberry plugs.  Photo from Justin Ballew