Zack Snipes reports, “We have had a very wet spring with some places receiving over 13 inches of rain this month.  Crops look surprisingly good considering the excess rain and cooler nights.  I have seen an increase in worm activity on brassicas, particularly the cabbage looper.  With all the rain, I have seen some hot spots of bacterial spot in tomato.  If you scout from your truck or tractor, you will not find bacterial spot until much later in the growing season.  The disease starts on the bottom leaves of your tomatoes and works its way up throughout the season.  Preventative products such as copper, mancozeb, and plant activator products are the only control measures we have. Get out and scout and look very closely, as the disease is very difficult to see in the beginning stages.” 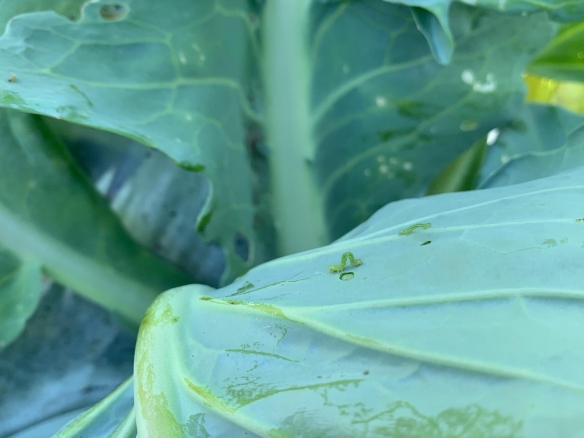 Cabbage looper on a cabbage leaf. Photo from Zack Snipes.

Bacterial spot starts on the bottom leaves and works its way up the plant throughout the season. Photo from Zack Snipes.

Justin Ballew reports, “The weather was really nice this past week. We got about an inch of rain early Thursday morning and it has been breezy since, so all the water dried up fast.  The weather conditions have been perfect for grey mold in strawberries and it is showing up in areas where folks are falling behind in sanitation. It looks like there are more blooms on the plants this week, but with temperatures in the 80’s for a few days, that may slow down some.  Thrips are still an issue in places and treatments are going out, so keep scouting. If you need to make an application for thrips, do it early in the morning or late in the day to avoid spraying foraging pollinators. Keep looking for spider mites as well.” 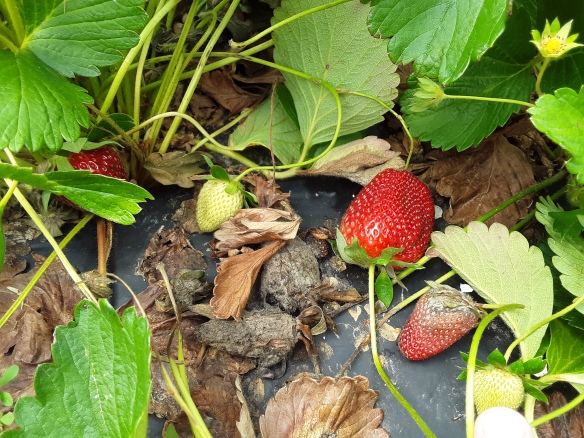 Rotting berries covered in Botrytis spores can go unnoticed in between plants.  Every time the wind blows, spores from these berries will be dispersed to other areas of the field. Photo from Justin Ballew.

Sarah Scott reports, “Peaches are progressing nicely in the Ridge area. Growers started harvesting early varieties. Some issues of bacterial canker are still becoming more noticeable in later varieties. The first sprays for scale crawlers have been applied and growers are continuing weed and orchard management sprays. Still picking strawberries. Crops for summer harvest are being planted still such as tomatoes and cucurbits. We’ve had some nice rainfall over the past week to keep soil moisture up but we have had high winds that have caused some limb breakage in orchards and stress on young vegetable transplants in the field.” 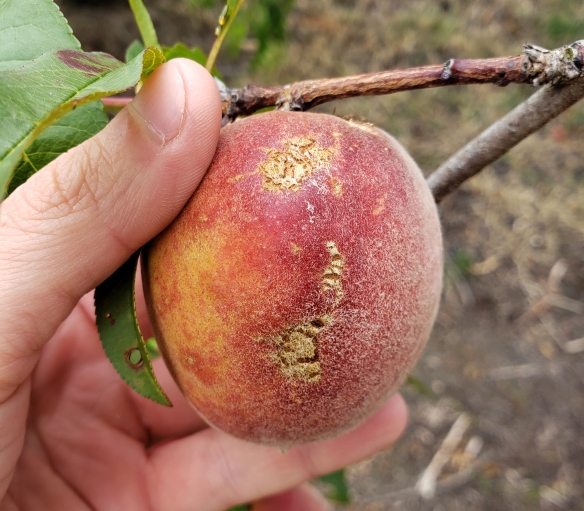 Tony Melton reports, “Winds are awful and damaging crops (sandblasting, wringing off plants, leaving spots on leaves and stems, causing wounds where disease like damping off can start and enter plants), stunting plants, and causing early flowering in tomatoes and peppers.  Insects are awful, including grasshopper, thrips, diamondback moth, yellow-margined beetle, and false cinch bugs.  Rains and irrigation to keep down sand blowing are causing leaching of nitrogen. In combination with decreased plant growth due to wind, we are adding extra nitrogen to get the plant size needed to get yields.  Hopefully, we can keep the processing tomatoes and peppers in the growth stage a little longer before the fruiting stage really kicks-in and further reduces plant growth.”

Kerrie Roach reports, “While some have been hesitant, many Upstate Farmers Markets opened for the season this past weekend. Utilizing revised set-ups, handwashing stations, and promoting social distancing people still came out to support growers. Strawberries in Pickens and Anderson Counties are producing well and growers are selling out quickly. Weather conditions have been great for growing the last few weeks, and many of our market growers will be starting to move into the production stage over the next few weeks.”