Zack Snipes reports, “It has been a hot week in the Lowcountry. Most spring and summer crops have finished up. Ground is being prepared and planted for fall crops. I have received a few texts from growers that have yellow dots on their zucchini plants, which is downy mildew. Even in this heat downy can still be an issue. I have also had some reports of green-colored squash in fields which is an indication of a viral pathogen. The crop handbook has recommendations for cultivars that are resistant to these viruses that cause this discoloring. Fall is notoriously bad for cucurbit viruses so plan accordingly.  I have also seen some flea beetle damage on crops as of late.”

Downy mildew looks a little different on zucchini and pumpkin than it does on cukes. Photo from Zack Snipes. 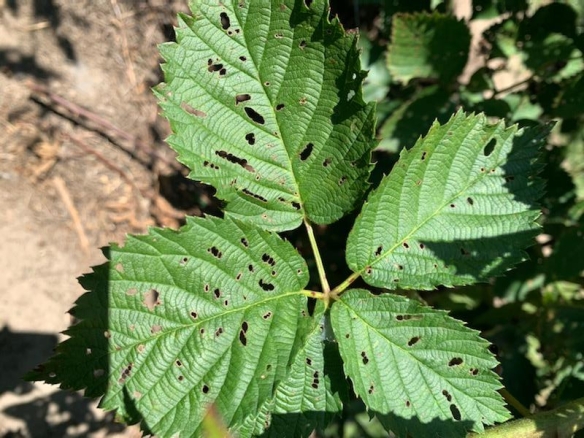 Justin Ballew reports, “It’s been hot in the midlands and we’ve gotten to the point where there isn’t much relief at night. We had some scattered rain throughout the week, but overall we’re still quite dry. Lots of land is still being prepped for fall crops. We’ve had some fall brassicas and cucurbits planted already and they’re looking good so far. Last week I got to watch a pecan grower in Lexington thin some pecan trees. Without thinning, he would have seen a massive yield this year, which would result in a significantly diminished yield next year. Pecan growers aim for nuts on just 70% of the terminal buds.” 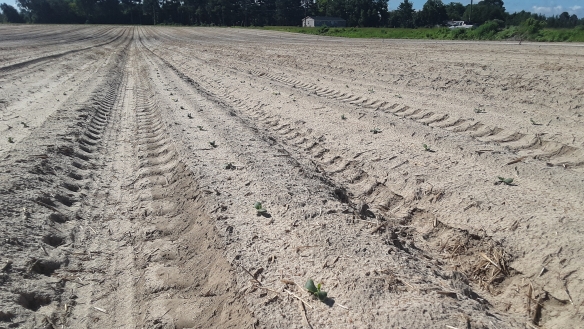 Thinning pecans with a mechanical shaker. You can see the nuts fall as the tree vibrates.

Tony Melton reports, “Pickles are still being harvested and planted. We still have hundreds of thousands of bushels in contract to be planted and harvested.  Peas for processing are being rapidly harvested and replanted, some seed is short.  Sweet potatoes are starting to swell and size.  Processing peppers are being harvested but we have a shortage of labor and multi-millions of lbs. left to harvest.  Processing tomatoes will be finished harvest this coming week.  Spring planted fresh market butterbeans and peas are mostly harvested but seed is short to plant the fall crop. Still have some flooded fields and drowned crop.”

Kerrie Roach reports, “Spotty rain across the county again last week has led to continued issues for growers without irrigation. Fall planting for vegetables is in full force. Peaches are looking good, and apples are coming along. Most growers will be putting on a fungicide cover spray this week before significant rains are forecasted.”

Andy Rollins reports, “Bacterial speck and bacterial spot of tomato are major problems in plum tomato varieties in the upstate right now.  They were not able to control this disease even with a vigorous spray program using mancozeb + copper on several farms.  In nearby plantings of large fruit varieties, the disease is present but not a problem.  Samples have been sent to researchers at Auburn University where the have confirmed the presence of copper resistant isolates from other farms.  Call on your extension agent for assistance with identifying and controlling this problem.” 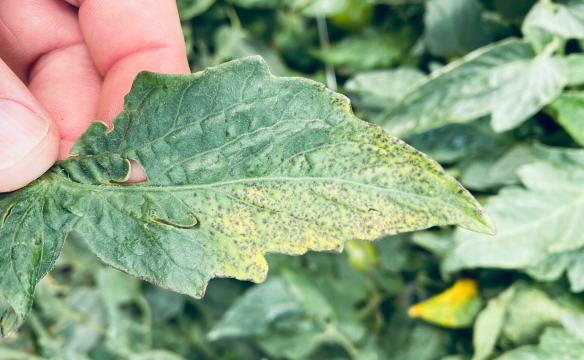 Bacterial speck on a tomato leaf from the upstate. Photo from Andy Rollins.

Zack Snipes reports, “Things are looking good in the Lowcountry. We are harvesting lots of produce right now just in time for the holidays. I have seen some cold damage on some brassicas but other than that very few issues to report.”

Justin Ballew reports, “The weather has been pretty mild over the last week and we have had some rains. We’re picking some really good looking collards and kale right now. Caterpillar populations remain low in most places, though there are some hot spots around. Lots of folks have been asking about necrotic lower leaves on brassicas that have appeared since the temperature dipped into the 20’s the week before last.  In most cases this is only cold damage.  We can see some secondary fungal development on the damaged tissue, but its not really concerning.  Just pick those leaves off, the new growth will be fine.

Lower collard leaf damaged by the cold. New growth will be unaffected. Photo from Justin Ballew

Sarah Scott reports, “Peach fields are being prepped for new plantings.  A levee plow is used to create berms to plant the trees on top of.  Growers have adapted this technique to increase tree life due to soil borne disease issues.” 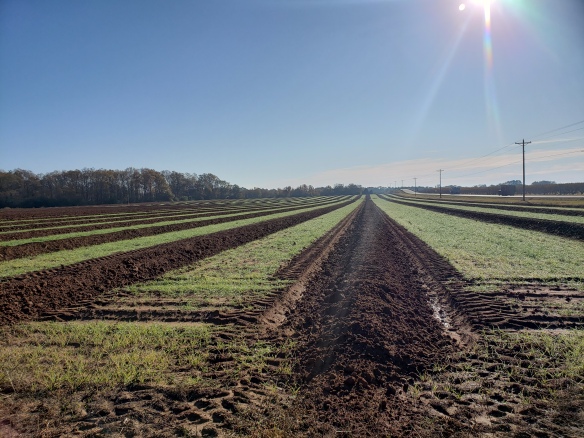 Tony Melton reports, “Still digging processing sweet potatoes even though tops are dead. A good portion of fresh market collards were sold over weekend. All processing turnips, mustard, and collards have been harvested at least once and some twice. For a summary of vegetable research conducted at the Pee Dee Rec in 2019, see this PDF: 2019 PDREC Farm Research19.”

Mark Arena reports seeing some premature pecan germination. “We can see this when the trees do not receive enough water to complete shuck splitting and the nuts remain lodged in the husk for an extended period. Combine this with warm late season temperatures after nut ripening is complete and the addition of rainwater accumulating in the shuck, which provides ample moisture to innate rooting. Affected nuts are considered inedible. Proper irrigation and shaking the trees in the easiest remedy for this condition.”